Three secondary school pupils from East Lothian have won places in a pro-am team and will be playing alongside some of the biggest names in golf. 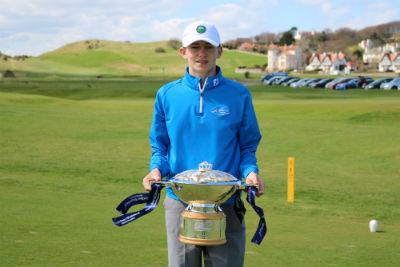 The pro-am match will take place in Gullane this summer as part of the Aberdeen Standard Investments Scottish Open.

With the event deciding who would win the three places in East Lothian Council’s ASI Scottish Open Pro Am team at Gullane on Wed 11th July, there was everything to play for and the competition was tough. There was a wild card place up for grabs for the player with the best scratch score on the day, as well as a place for the winners of the Scratch and Handicap Divisions over the whole five events.

The young players were also treated to a ‘visit’ from the ASI Scottish Open and Aberdeen Standard Investments Ladies Scottish Open trophies. Both prestigious tournaments will be played at Gullane this July.

“Well done to everyone who took part in this competition. It’s great to see golf being played at such a high standard by our young East Lothian residents.Councillor John McMillan

And congratulations to Lewis, Jack and Jamie who have won this amazing opportunity to play alongside some of the giants of the golfing world right here in East Lothian. Excitement is building for these two major tournaments at Gullane in July and I’m sure our three winners will be the most excited East Lothian residents! Thanks also to our sports development team for their tireless work in encouraging youngsters to take up the sport. What better place to learn than on Scotland’s Golf Coast?”

Overall winner of the competition, Lewis Hannah, who took up golf nine years ago and has reduced his handicap from 28 to three in seven seasons of competitive golf, said: “Winning this place has meant a lot to me. Firstly to be given the chance by the tournament to play in the pro-am is extremely fortunate, secondly to win the Secondary Schools Order of Merit after playing in each season of it since it started in 2012/13 is extremely pleasing.”