Every school pupil in East Lothian will get their hands on the coveted Aberdeen Standard Investments Scottish Open & Ladies' Open trophies when they go on tour round our schools. 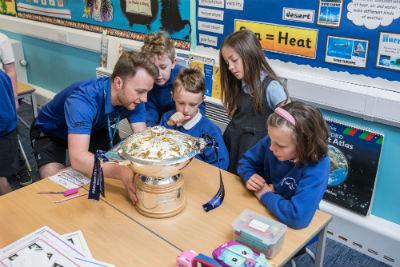 Gullane Primary School pupils had the honour of hosting the trophies first, ahead of the prestigious tournaments coming to the town this summer.

Essentially, the pupils will get the chance to lift the trophies before the winners do! As well as the chance to get up close and personal with some famous silverware, school pupils will watch a presentation and videos by the European Tour and IMG, the promoters of the tournaments, which will give them a flavour of the importance of the tournaments, as well as the health benefits of playing golf and the advantages of attending the competitions for a day and walking the fairways with the 1000s of other spectators expected to descend on Gullane this summer.

In addition, the children will find out more about the structured junior coaching opportunities available to them locally, encouraging them to try out golf at one of the many world-class golf clubs right on their doorstep on Scotland’s Golf Coast.

It’s rumoured that some schools may even get the chance to host a question and answer session with a professional golfer.

It’s hugely important, especially in the Year of Young People, that we involve our youngest community members and introduce them to the benefits and excitement of golf. Provost John McMillan

“The spectacular summer of golf we’re looking forward to on Scotland’s Golf Coast is already creating excitement locally and across the world’s golfing community. We hope that many pupils and their families will enjoy the tournaments happening in East Lothian this year and, who knows, we might even end up inspiring a future champion!”

“I think it is great that the local kids are going to get to see and hold these two iconic trophies ahead of the exciting summer of golf and hopefully it’ll inspire them to come down to Gullane Golf Club to support. The Aberdeen Standard Investments Ladies Scottish Open is always such a special event but what sets it out above other tournaments is when the Scottish crowds come out to cheer us on. With this year’s event being so close to home, I’m looking forward to seeing a few familiar faces in the crowd.”

A number of classes in each school will also be taking part in Scottish Golf’s ClubGolf programme as part of the curriculum, giving a large number of children the chance to play golf for the first time prior to the trophies being present in their school.

The trophy tour will have a grand finale at Sandersons Wynd Primary School, Tranent on 26 June with many invited guests.

Both the Aberdeen Standard Investments Men’s and Ladies Scottish Opens are supported by the Scottish Government through VisitScotland as part of a world-class annual portfolio of golf events taking place across Scotland, the Home of Golf.

Supporting major events helps to inspire new generations of golfers, generate economic impact, and showcase Scotland’s outstanding golfing assets to a global audience, supporting the country’s golf tourism industry which is worth in excess of £286 million per year.