While Malcolm lifted the trophy for a photocall, we’ll need to wait until Sunday, 15th July to find out which golfing star lifts the trophy for real at the conclusion of the Aberdeen Standard Investments Scottish Open, which returns to Gullane Golf Club from July 11-15th. 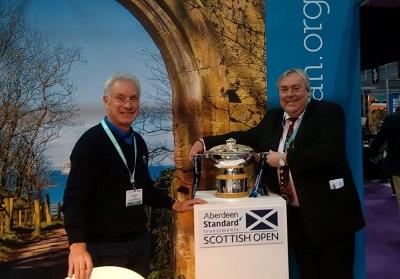 The ASI Scottish Open is the jewel in the crown of a string of events happening on Scotland’s Golf Coast between July and October this year – making 2018 the ideal time for golfers and golf fans to come and see what this ultimate, ‘must-play’ golfing destination has to offer.

Gullane first hosted the Scottish Open in 2015 when Rickie Fowler lifted the trophy. A stellar field of some of the world’s best golfers are set to return this year to vie for the coveted title at this unmissable Rolex Series event – well known as a warm-up event for The Open, which takes place at Carnoustie the following week.

As well as the opportunity to watch some of the best golfers in action, Gullane will offer visitors an entertainment-packed village boasting activities for all the family including music, children’s events and food and drink outlets showcasing the very best of East Lothian’s world-class local produce. In all, a special experience awaits in this dramatic coastal location.

Gullane then hosts the Aberdeen Standard Investments Ladies Scottish Open for the first time from 26-29 July. As one of the flagship events on both the LPGA and Ladies European Tour, the 2017 edition hosted some of the best talent from around the world including three of the world’s top five and eight of the world’s top fifteen players. With more of the world’s best coming to Scotland this summer, why not come and see who will ‘Rule the Links’ at Gullane Golf Club this year?

Craigielaw Golf Club is the next venue to host some of the legends of the sport when it plays host to the Scottish Senior Open, newly re-branded the Staysure Tour, from September 14-16.

Later in the year, and stepping back in time, The World Hickory Open returns to Scotland’s Golf Coast for the 14th consecutive time, taking place from 21-26 October at Luffness New, Kilspindie and, for the first time, Longniddry. The tournament has captured the imagination of players and spectators in previous years with many people turning up, and playing, in vintage costumes to match the historic hickory clubs. It’s a chance for spectators to really get a flavour of how the game used to be played – even dating back to the time when Mary, Queen of Scots was rumoured to have played at Musselburgh Links. Where, incidentally, golfers can still hire a set of hickory clubs to this day to try out ‘vintage’ golf for themselves!

Councillor John McMillan, Provost of East Lothian and Cabinet Spokesperson for Economic Development & Tourism, said: “This is a fantastic opportunity to showcase Scotland’s Golf Coast to a global audience, promoting our truly great golf courses and wonderful hospitality to the golfing community. The stunning setting of Gullane will be particularly on show for the ASI Scottish Open – and what a show it will provide, with its challenging course and stunning scenery. I hope to welcome visitors from all over the world to East Lothian for our absolute feast of golf this summer and autumn. – and I hope to be welcoming them back for years to come!”