The result of the public vote to choose a civic flag for East Lothian was revealed at a reception at East Lothian Council HQ last night (Thursday). 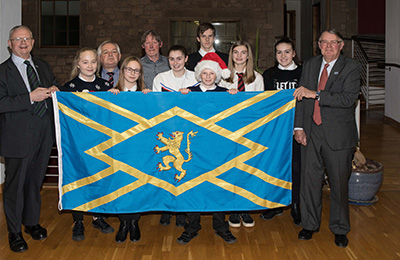 The winning design by Archie Martin will be available for use right across East Lothian and for any groups with an interest in the county.

Sadly, Archie passed away not long after submitting his fantastic design. His family members were delighted to hear the news that his design had been the favourite amongst voters.

The winning flag features the Saltire design on blue to mark East Lothian’s status as birthplace of the national flag. The gold cross signifies the wealth of East Lothian’s farmlands and reputation as the granary of Scotland. The Haddington lion is also prominent, along with blue stripes to represent the rivers Esk and Tyne.

East Lothian Provost John McMillan said: “It was an emotional evening and an absolute privilege to be there at the announcement of the wonderful winning design. I think this is a simple yet eye catching design which I hope will very quickly become a strong symbol of East Lothian and adopted by groups and residents for many years to come. It was very sad that Archie, a very much loved and missed former council employee, could not have been there to hear that his design had come out top of a very tough competition but I’m delighted that his family were so pleased with the news.”

Lord Lyon Joseph Morrow said: “It’s an honour to be with the people of East Lothian to celebrate this cairn in their history with the choosing of such a strong image of a flag to represent the qualities of the district, but above all the spirit and pride that people have in their area. I congratulate the winner of the competition and send my best wishes to his family and to all who participated in this cairn building exercise. I look forward to recording the flag in the historic register of the Lyon Court.”

David Williamson, Chair of the Scottish Flag Trust, said: “The Scottish Flag Trust initiated the idea of a design competition for a civic flag for East Lothian in the summer of 2017, and we are delighted to see it come to fruition. What has been most heartening has been the high level of community buy-in throughout, both during the design phase in which hundreds of entries were submitted, and during the voting phase in which record numbers of the public took part. I think everyone can be pleased with Archie Martin's distinctive flag design which attracted a clear majority of votes."

The competition to design a unique flag for East Lothian was launched in November 2017 and captured the imagination of both local people and even those as far away as the USA and New Zealand, as 623 entries were received from people of all ages and from all over the UK and further afield.

Judging began in March 2018 with an initial sift of the huge number of designs submitted – the most in any civic flag design competition across Scotland. The final designs to go forward for the public vote were chosen and voting began in summer 2018 for a period of four weeks. A total of 1,532 votes were cast.

The design has now been registered with the Lord Lyon and will be available on the Scottish Flag Trust website shortly for anyone with an interest in East Lothian to view and use.