Meet Brandon and Christie, third year Apprentice Electricians in our Property Maintenance team. They are sharing their experiences for Scottish Apprenticeship Week 2019.

It’s a great group of people; everybody’s willing to give you as much support as you need

A craft apprenticeship combines college work undertaken in blocks with lots of practical experience. “There’s a lot of work required at home to begin with,” says Brandon. “In the first two years you’re learning stuff you haven’t done a lot of on site. When I look back, knowing what I do now, it would be so much easier!”

Brandon applied for his apprenticeship after finishing at Preston Lodge High School, while Christie had been pursuing a career in retail before deciding to make a change. “I always had an interest in physics when I was at school and you learn about electricity in that. I was looking around for new jobs and when I saw the apprenticeship advertised online I thought it would be something I would like to do,” explains Christie.

On a day-to-day basis they are paired up with a qualified electrician and cover a wide range of domestic jobs from responsive repairs to electrical work on the planned bathroom replacement programme. They’ve also had experience working on sites, including the Law Primary School extension – something they both admit has helped them learn a different side to the trade. “People might think a council apprenticeship might just be in houses but it’s not. Being on site is different and includes things like conduits or metal work,” says Brandon. Christie agrees, adding: “It’s totally different from domestic work, which is smaller scale, whereas the school was more industrial.”

Taking on apprentices is an important part of the council’s work to develop its workforce and create a stream of highly qualified tradespeople. Dedicated supervisors support the apprentices throughout their time. Both men hope to be kept on at the end in a permanent role. Christie says: “It’s a great group of people; everybody’s willing to give you as much support as you need. I’m totally comfortable where I am and I’ve come a long way.” 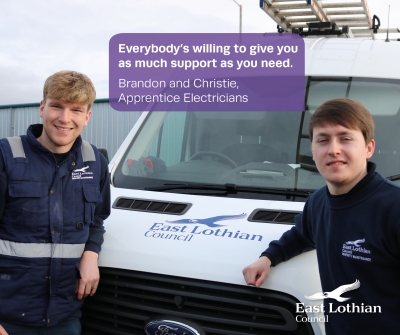