Great news for apprentice joiner Alan Smith who scooped the award for best Second Year Trade apprentice in the national APSE Scottish Building and Housing Apprentice of the Year 2019 Awards.

The achievement is all the more remarkable considering it’s the second year Alan has won this award, as well as being announced Edinburgh College Apprentice of the Year 2018.

Alan, 52, from Macmerry, had always been interested in being a joiner but on leaving school it was difficult to get an apprenticeship so he worked in open cast mining for many years as a plant operator. With the decline of mining Alan realised he needed a career change so found a job as a labourer for the council which then led to the joinery apprenticeship.

He said: “It’s something I’d always wanted to do and even when working as a labourer I worked with a lot of joiners so the interest grew and then the opportunity for the apprenticeship came up. Winning the award was a great achievement. But I think I’m a bit hard on myself. I don’t think I’m better than anyone else and I still make mistakes! But I suppose I must be doing something right! It’s all about continuing to learn and getting better all the time.”

APSE (The Association for Public Service Excellence) is a not-for-profit local government body working with over 300 councils throughout the UK promoting excellence in public services.

Alan submitted a portfolio which included examples of his work including photos, references from supervisors and college lecturers and any major achievements as well as being interviewed by judges.

The winners were announced at the APSE Scotland Building and Housing Seminar in Dunblane on Thursday 7 February 2019.

Paul Grant, Service Manager, Property Maintenance, said: "I am delighted for Alan that he has achieved this national apprentice award for the second year in succession. This is a hugely competitive award attracting a high number of entries and a considerable amount of work in developing a portfolio. Alan is a credit to the service and I hope this award will act as an inspiration to our other apprentices as they work their way through their traineeships." 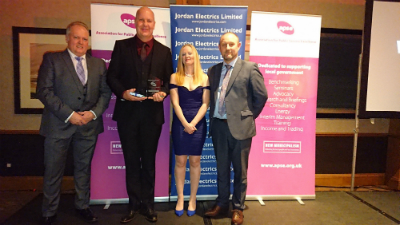