Andy is Heritage and Archaeology Officer and has been busy preparing for East Lothian Archaeology and Local History Fortnight, taking place until 15th September.

The fortnight has been running since 2002 and this year there are 54 events, involving 34 different community and professional heritage organisations.

Originally an engineer by trade, Andy “hated the maths side of it” and went back to university to study Medieval History and Archaeology. He then worked as a commercial archaeologist before joining the council. “It opens up a lot of possibilities,” Andy said about his degree. “There are very few folk that actually stay in using history or archaeology as a career, but somebody’s got to do it so it may as well be me!”

Archaeology and Local History Fortnight is a highlight of the year for Andy, as it helps him remember why he got involved in archaeology in the first place. He’s most excited about the Whiteadder project, which he’s been working on for the past two years and involves reinstating the historic link between Garvald and Duns.

It's always that element of mystery - will it be there or won't it be there?

Excavation work has begun using innovative technology. “We’ve managed to get things like LiDAR, which is lasers bounced off the ground to a really small scale so you can see through the trees, through the gorse and everything,” Andy explains.

The work is paying off – “We started off the first excavation last week and we’ve actually found what we think is the edge of Morham Castle, the lost castle. We’ve got a corner of a massive building and all the finds from it are medieval, there’s nothing later, so we think we’ve identified it.”

Although his current job means he’s not at excavations very often, Andy spent more than 20 years in the field and digs still excite him. He said, “They’ve got such long running work behind them and it’s always that element of mystery – will it be there or won’t it be there?”

Andy is looking forward to seeing how the Whiteadder project progresses during the fortnight. “That’s probably the highlight for me, plus things like the Medieval Fayres, the Roman Fayre we had at the weekend, and there are quite a few walks and talks going on. There’s something for everyone, it’s just what piques your interest,” Andy explains. Last year more than 8,000 people attended events, and the only downside for Andy’s team is that they can’t make it along to every one!

As well as community and outreach work like speaking to schools and organising events, a big part of Andy’s job involves assessing planning applications. “Every planning application that comes in, I assess for heritage impacts. That’s anything from buried medieval cemeteries through to eighteenth century steadings and everything in between,” he explains.

It’s a varied job which Andy enjoys. “What I like is I don’t know what I’m coming into in the morning. Not a lot of jobs can say that! It’s quite interesting.”

See what's on during Archaeology and Local History Fortnight 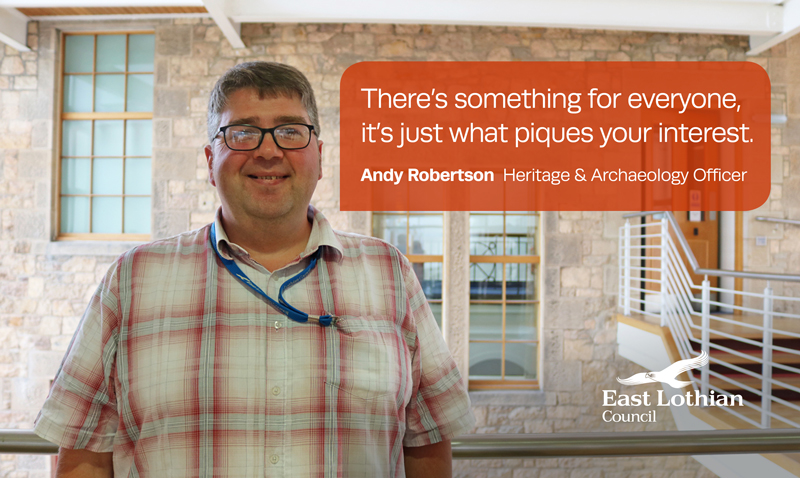