Richard has worked with the ranger service for 20 years, beginning as a seasonal ranger at John Muir Country Park. He now covers the area that includes Pencaitland, Ormiston, East and West Saltoun and Humbie. “Our remit is essentially nature conservation, but we cover that in different ways,” Richard explains, from practical conservation to educational work with schools and communities.

Richard and the team are trained to use scythes for grassland management, which is better for the environment than using mowers or strimmers. “It’s quite relaxing once you get into the swing of it,” Richard said – not least because you see toads and mice left in the grass afterwards, which may not have escaped other methods!

Scything is used in areas including the Pencaitland and Haddington to Longniddry railway walks, and is just one of the ways the Countryside Rangers look after East Lothian’s environment sustainably. “We have grazing projects at both Berwick and Traprain Laws, and at Barns Ness and Aberlady,” Richard said. “We also do tree planting, we’ve done a lot of that up at Gifford recently, and hedge laying.”

“Sustainability has always been part of the job as a ranger, it’s just built into the mindset, and arguably everyone else it catching up with us!” Richard explains. As well as adopting sustainable ways of working, Richard believes the community work and events held by the team help to get the wider community thinking about the environment.

“We can’t save the planet on our own,” Richard said, “so if we can instil a sense that people have the natural environment around them to enjoy and to fall in love with, in the long term that’s going to benefit the environment. People are going to learn to respect it and treat it well.”

The team also look out for East Lothian’s wildlife, and one of Richard’s colleagues has been working to create a new habitat for the rare and beautiful Grayling butterfly at Levenhall Links. This pioneering project is a partnership between the ranger service, East Lothian Countryside Volunteers and Butterfly Conservation Scotland.

Richard finds his job “incredibly satisfying.” He said, “It’s just a good job to do, and like a lot of people in local government, I think it’s more of a vocation than a job. It’s also satisfying to work with people who are getting out there and enjoying themselves, and seeing that satisfaction from them.”

Find out more about the Countryside Ranger service 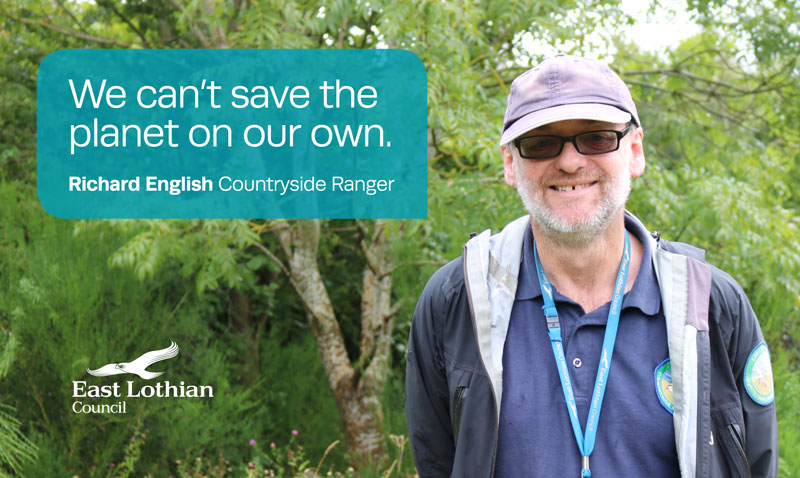