A number of awards recognising hard work and commitment were presented to council employees and local volunteers at a ceremony to mark Scottish Housing Day 2019. 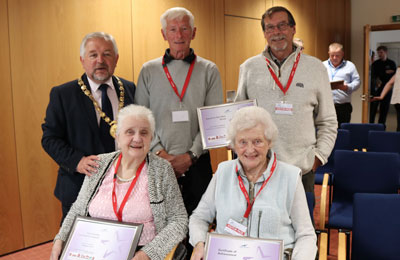 Margaret Fortune from Haddington, who received a Long Service Award for involvement in local tenants and residents group. Margaret has been involved in local groups for many years and more recently was involved in the setting up of the Riverside Tenants & Residents Group. She now volunteers with the Haddington East Group.

Hallhill Tenants and Residents Group, Dunbar, which was presented with the New Group Award.

Margaret Scott from Tranent, who received an award for outstanding contribution to tenant participation. Margaret has been involved with ELTRP and the Tranent West Tenants and Residents Group for many years. She is well known for her positivity and hard work.

Councillor Jim Goodfellow, Cabinet Spokesperson for Housing and Wellbeing, presented a number of employee achievement awards. To mark their completion of the Chartered Management Institute Level 3 qualification, certificates were presented to Gary Robinson, Community Housing Officer from the Tranent team and Lyndsay Brotherston, Community Housing Officer from the Musselburgh team. Debbie Berston, Senior Housing Occupational Therapist, has also achieved this accolade and will receive her certificate at a later date. 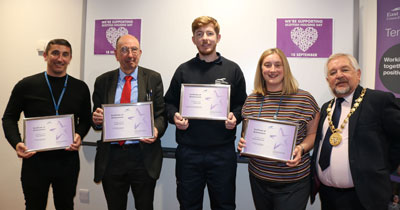 “We hugely value the commitment and hard work of the many volunteers who play such an active role in East Lothian’s tenants and residents groups. Working together and partnering helps us deliver improvements to services while maintaining high-quality housing for local people. Congratulations to Margaret Fortune, Margaret Scott and the Hallhill Tenants and Residents Group, who are very worthy winners of the ELTRP awards.”

“Investing in and developing our employees is a priority for the council and I’m delighted that Gary, Lyndsay and Debbie have achieved the CMI Level 3 qualification. Apprenticeships are hugely beneficial pathways both in terms of career development and ensuring we have skilled people committed to providing a quality service across the council. Very well done to Charlie, Connor and Alan on receiving these awards.”