Gary is a Community Housing Officer in the Tranent office and has been in the job for 11 years.

Gary worked as a lifeguard before getting into housing and was pleased to find himself in such a varied job.“Our job’s mixed between being out in the community and office based, so we deal with the public every day. You don’t know what you’re coming into each day, which is what I like.”

The office has a housing officer on duty every day to take calls and see people coming in with enquiries. Gary also spends time at the Wellwynd Hub in Tranent, offering housing advice to people having occupational health assessments.

Although Gary sometimes deals with challenging cases, he says it’s satisfying to find solutions to people’s housing needs. “It’s about being resilient and trying to work it out,” he explains. “The best thing is when people are grateful.” Gary’s team are always on hand to support each other too. “I think when you’ve got a good team that’s half the battle, definitely.”

“The office is never quiet, there’s stuff going on all the time. When it’s busy like that you’re very aware of what’s going on around you. That’s how I learned so much in housing, because there’s so much going on and you just pick things up,” he explains.

As well as learning from his team, Gary recently completed his Chartered Management Institute Level 3 qualification which he studied alongside colleagues from teams all over the council. “It was quite hard actually, I was chuffed to pass it! I would definitely say it’s worthwhile, the qualification’s recognised worldwide so it’s quite handy to have,” Gary said.

Gary’s been involved in a number of projects during his years with the council. At the moment he’s working on a project called My Place, which looks to pair care experienced young people with peer flatmates to help support each other to live independently.

“I think it’ll be quite a good project,” Gary said. “It’s good for the more vulnerable young people who maybe aren’t quite ready to take that step and go into a place on their own. This way they’ve got support around them until they maybe feel like they’re ready to move on.”

As housing policy develops, Gary and his colleagues have the opportunity to shape how any changes are rolled out. “There’s been quite a lot of changes in housing, so I’m on a lot of working groups as well. It’s constantly evolving and that’s what I like about it, because you do get involved in decision making when new policies are brought in,” he explains. “Because we’re working with it, we can say what’s working and what we feel could be better.”

Find out more about housing options in East Lothian 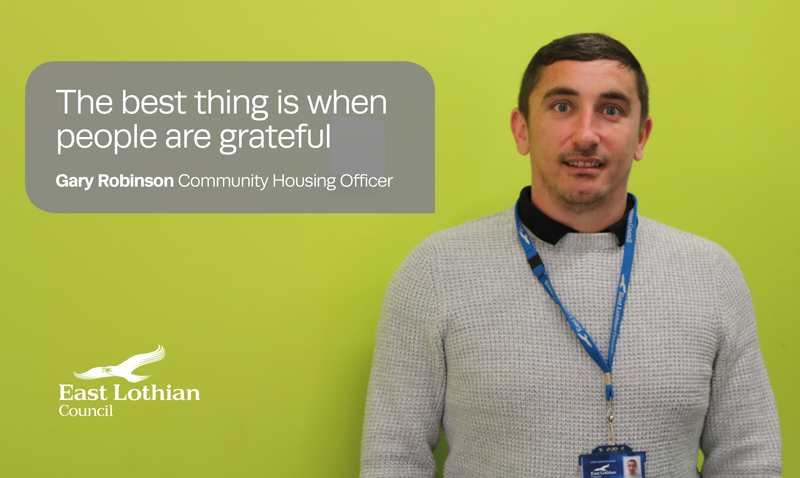