Shonagh has been with the council since 1996 and has what she believes is “a fantastic job” – teaching drama in East Lothian schools.

Shonagh offers a series of workshops for all ages and stages which form part of the Arts and Creative Learning Projects Brochure. Teachers can choose from this or request specific sessions, for example to link in with books children are learning about in English. “I always like to include new programmes each year, so I need to be very organised,” Shonagh explains. “It’s a busy job, but it’s greatly valued.”

The topics Shonagh covers include history, from the Highland Clearances to the civil rights movement, and social issues. “What never ceases to amaze me is the children’s depth of feeling,” she said. “If I touch on topics like citizenship and environment, I think it’s so important to educate and empower children. It really is a balance.”

Shonagh is always responsive to each class and where they want to take the drama, as she explains, “My job is to go in fully prepared, but with an open mind and loads of enthusiasm. I was teaching P2s Sleeping Beauty and it was absolutely wonderful because the princess didn’t want to marry the prince! So I said ‘okay, what do you want?’ ‘To be friends!’ she said, and the whole class clapped! It’s really interesting, because within stories there’s often a deeper meaning and a deeper teaching.”

Working mostly in East Lothian’s primary schools, Shonagh is full of admiration for class teachers who are in attendance for every class she teaches. “Class teachers astonish me on a daily level. They’re part psychologist, sometimes part parent, they’re role models, they’re saints. And they have to, within their class, create a community whereby each and every child feels safe, with the right to communicate and ask questions,” Shonagh said.

Shonagh looks to upskill teachers in their own drama practice, and her sessions also offer a valuable opportunity for class teachers to observe their class with another adult. She invites the class teacher to evaluate every session she runs and also offers courses for newly qualified teachers.

Shonagh practices mindfulness and sometimes incorporates this into her lessons, to help strengthen empathy and compassion. “Drama is of course about empathy, it’s about imagining ourselves in somebody else’s shoes,” she explains. “I often find that if children have difficulty in drama it’s because they want to know the right answers. I’ll say, it’s not like maths where two and two makes four – I’m going to be asking you what you think. So they have to be feeling very secure to express the feelings of a character, which may in fact be their feelings about a situation.”

“I’m a seeker of the shy child,” Shonagh continues. “My drama is not just about the vociferous, confident child. My drama is about creating an environment, very quickly, where they know that I will really listen and respect them. Because all drama is about story, but all teaching is about relationship.” 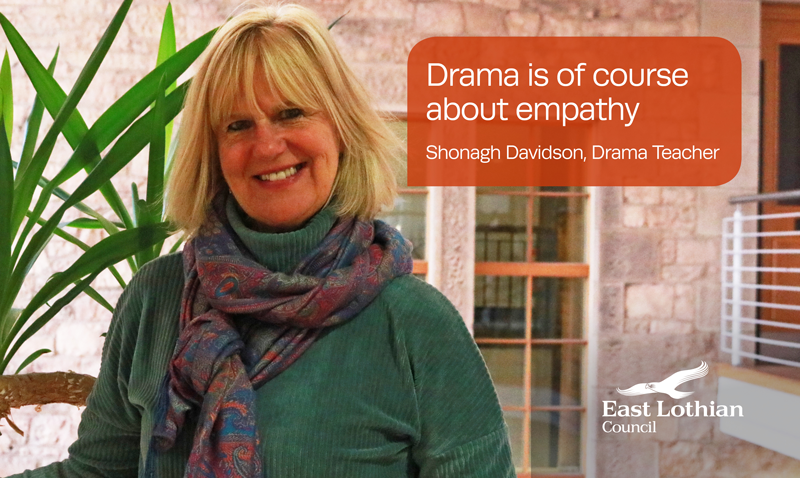