Morven has been with the council since 2007 and was awarded Employee of the Year in December for her work establishing the Active and Independent Living Clinic as part of the innovative Wellwynd Hub.

Working as a Senior Practitioner and Team Manager in Adult Wellbeing, Morven’s time is split between seeing clients, operational and strategic work. “It’s lovely because I still get the balance of seeing and helping clients, then I get to do all the really exciting stuff and make changes like Wellwynd Hub,” Morven explains. “I feel that still being partly clinical, you can still see what’s needed for people because you know what’s happening on the ground.”

Wellwynd Hub has been running since December 2018 and allows people to see occupational therapists, physiotherapists, telecare specialists and housing officers under one roof. The setting is a converted warden’s flat which has been transformed into a ‘dementia friendly’ environment featuring smart technology and equipment and adaptations to assess people in a homely environment.

In the early stages Morven hoped the clinic would reduce waiting times, but didn’t expect it to be quite so successful! “We didn’t expect to see so many people – within the first four months we’d reduced our waiting list by 28% which is fantastic. We knew at this point we could develop the clinic further and assess people with quite complex needs, away from their home environment which can help therapists and clients see things in a different way.”

By reducing the waiting list and providing joint assessments, the team are able to see people quickly and begin interventions and treatment sooner. Early intervention helps prevent a functional decline and relieves pressure on services in the longer term. “The sooner we see people, the better their outcomes are likely to be,” Morven explains.

“It’s been amazing being able to create a new service and we’re seeing people in under 6 weeks,” Morven explains. “It’s made such a difference to the wellbeing of people living in East Lothian that have attended our clinics. The outcomes of the people that we’ve treated are amazing. Over 80% of people we’ve treated at Wellwynd Hub have improved functional outcomes and that’s just astounding! Their lifespan increases because their activity increases. We will have happier, more independent and active people. What more could you ask for?”

Along with Morven being awarded Employee of the Year at the council’s Star Awards, the Wellwynd Hub team picked up the One Council Award. Morven was delighted to see this recognition for her team. “I had a little idea and I ran with it, but the whole team put the idea into practice and that’s what actually makes the service run,” she said.

Wellwynd Hub has been recognised externally too. The project won the Chartered Institute of Housing (CIH) Excellence in Health & Wellbeing Award and was highly commended at the COSLA Excellence Awards in October 2019.

Morven has also been able to share the lessons with others in her field. “They’re thinking about setting up a similar clinic in one of our neighbouring councils which is great, it’s fantastic,” she explains. “And I’m planning to write an article for the Royal College of Occupational Therapists’ journal, so that nationally people can see what we’re doing. I’m delighted at how well it’s gone, it’s such a simple change in the way we work, and we’ve done it with no extra money and no extra resource.” 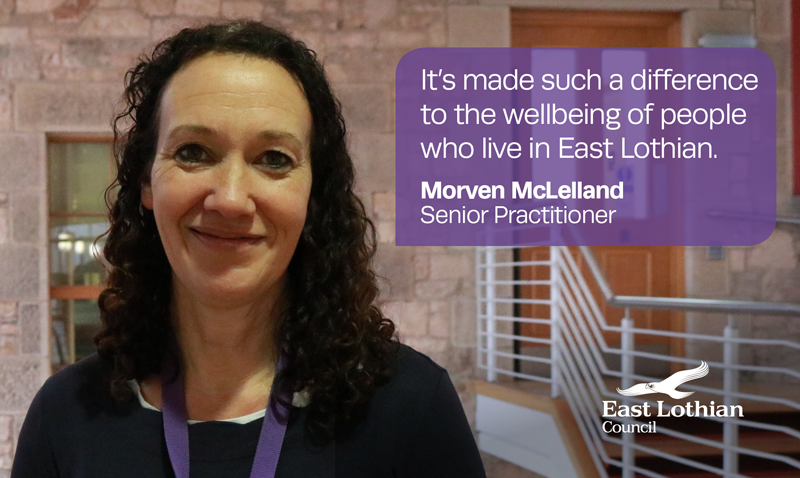