Organised, determined and methodical are all essential qualities for Sheila Fitzpatrick in her capacity as Team Leader for Licensing and Landlord Registration.

They’re also invaluable in her role as an RAF Reservist.

Sheila became a Reservist in 2015 when she was seeking a new challenge for her weekends. Having previously considered enlisting in the Services at an earlier point in her career she admits she wasn’t sure of certain aspects of the Reserves, laughing: “I didn’t realise that you were paid and thought it was all volunteering!”

After visiting her nearest Squadron and undertaking an aptitude test, Sheila was matched with a trade and began her training at RAF Halton. In the time that has followed she has benefited from new experiences and opportunities that she never would have had otherwise. It even led her to East Lothian, relocating across the country from her native Glasgow.

“There are so many new experiences that I’ve gained in the last six years as a Reservist that it gave me the confidence to entirely relocate,” she said.

Sheila’s role sees her coordinate all aspects of aircraft when they are in or leaving a station. On paper it couldn’t be more different to her work within East Lothian Council but she believes the skills and qualities she brings to each organisation enhance the other.

“Much of licencing can be quite prescribed which is similar to the RAF but you still need to be able to think on your feet because there will always be different situations that pop up. With Covid-19 so many businesses have had to change their business model so licensing has had to try to accommodate and work with that. It’s the same with the Reserves. It’s very methodical when things are going smoothly but I have been on an airfield when a civilian aircraft has had to undertake an emergency landing. You need to be able to adapt to the situation,” she said.

As a Reservist, Sheila has to commit to 27 days training each year – 15 of them continuous. She has recently returned from RAF Lossiemouth where she took part in Operation Joint Warrior, an annual NATO exercise. Training is central to being an RAF Reservist. As Sheila explains, how you manage your time to meet this commitment is a personal decision but it’s important that everyone on a base is fully trained. This includes training on weapons handling and Chemical, Biological, Radiological and Nuclear (CBRN) threats.

As a signatory to the Armed Forces Covenant East Lothian Council accommodates training through its employment policies, enabling unpaid leave so that Reservists can attend. Sheila admits that when applying for the role within the Council she checked it was a signatory to a Covenant, knowing this would mean her skills and experiences would be highly valued and supported by the organisation.

One of Sheila’s most memorable experiences came when she deployed to Musannah in the Middle East to work as part of a tri-service base. She spent four months working as part of a team which was a first for her and for the RAF as she was the first Reservist to travel to the Royal Air Force of Oman base. Having visited Oman previously to visit a friend, she admits that travelling as part of her RAF commitments was “an incredible experience.”

Sheila works alongside other Reservists and Regular Service personnel and says the camaraderie and team spirit is central to the Forces. “You wouldn’t be able to do what you do without everybody else in the squadron at your back,” she says. “At the adventure training weeks we’re all in separate teams undertaking different activities then at the end of the week there’s one big exercise and everybody is relying on everybody else to get them through. Money can’t buy the opportunities that you get being a reservist.”

Find out more about the East Lothian Armed Forces Covenant. 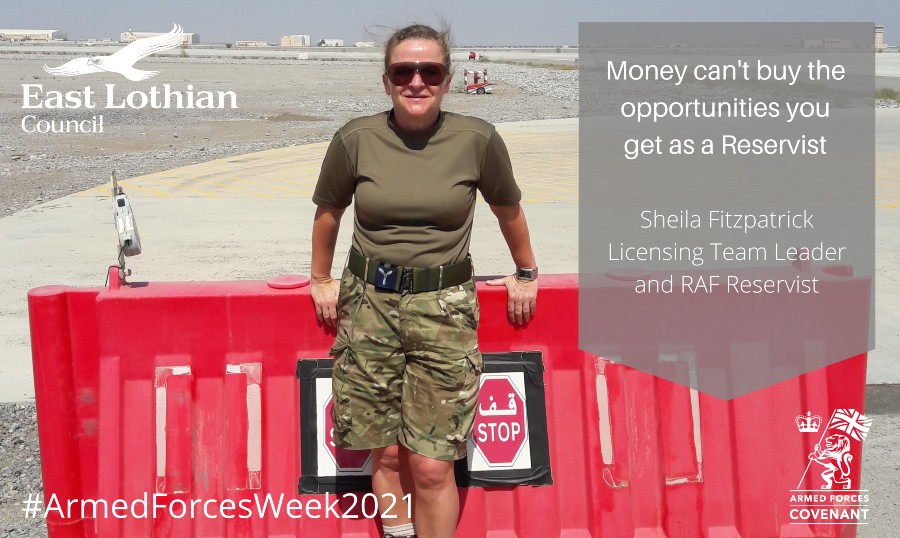