11am on Armistice Day is a moment when the nation comes together to pause and reflect on the sacrifices made by those who have served our country.

A former soldier, by his own admission Callum’s service career is “unique”. He joined the Army in 1977 at 16 before leaving at 21 and re-enlisting aged 40 in the wake of 9/11. Working as an ambulance driver when the news first came through, Callum’s overwhelming sense of public duty meant he felt compelled to re-enlist. “I’m very proud of being a former soldier. I served in the Royal Scots, which was the oldest Infantry regiment. You build up a bond with your fellow soldiers and you do all that you can to help the public. You fall in love with the job and what you’re there to do.”

Throughout his Army Service, Callum has completed tours of Northern Ireland, Bosnia and Iraq. He admits that service in Iraq was a struggle. “I was away from my regiment in a big logistic base. To go into the army at 40 years old and leave my wife and two sons behind was hard,” he says. Callum’s experiences reflect that serving in the forces is a commitment that the whole family lives with and the importance of good support for personnel and their families.

It is the desire to support other veterans, and to raise awareness of the mental health and physical disabilities amongst those who served, that drove Callum to take on his challenge. “When you’re out on operational duties and you know soldiers are getting killed, you personally know them and you attend their funerals, you know there isn’t as much support as there should be. PoppyScotland and the British Legion play a massive part and they’re short of funds,” he says. So far he has raised £2625 undertaking some pretty gruelling events – much of it carrying a weighted pack of up to 35lbs, which would be a standard kit for infantry personnel. This included the Catterick Paras 10, Virtual Arnhem Paras 10 and the 2021 Scottish Half Marathon which he completed in 1hr 41mins 51 secs – 1 minute from being an elite athlete in his age bracket.

Callum was joined by former comrades from the Infantry Junior Leaders Battalion (IJLB) for the Catterick Paras and one of his training sessions. He also organised some walking sessions with council colleagues, which Callum describes has having been: “good for team building, fitness and more importantly mental well being. One of the team has actually carried weight on a couple of sessions.” The rest of the TAB challenges he has undertaken alone with a WhatsApp group for motivation and a Strava group to track miles.

Callum has now completed 161 sessions averaging 35 miles per week over the 37 weeks. He says he has learned a lot about himself over the 1100 miles. “Your age really is just a number. When you set achievable goals, you will hit the target,” he says. 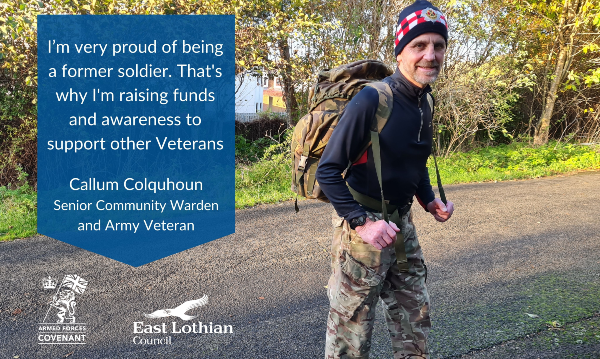 Callum is raising funds for PoppyScotland in a series of gruelling challenges, ending at 11am on Armistice Day 2021.