Meet Colin, who works in the IT department.

Colin works as a Lead IT Analyst at John Muir House. He studied Computer Engineering at Edinburgh Napier University and completed a placement year with the council as part of his course. 10 years later, in 2017 he returned to the council after working for the private sector. Colin was initially employed to help set up new mobile devices and also helped to manage the software and general end user interface. Through restructuring and promotion, his remit now includes all aspects of end-user platforms.

“Working within the Council’s IT Team, my day-to-day job is quite varied. For example, recently I have been updating systems to protect them from a big security issue that made headlines around the world and costing up computers for the expansion of our secondary schools." During the first wave of the pandemic, Colin was part of a team that set up and distributed almost 1000 new devices to help corporate staff, teachers and students when working remotely. This happened in the space of one month and was a vital operation taken on by all of the IT department.

In more recent times, whilst testing new software Colin spotted an issue with the Microsoft Edge browser and reported the bug to the Microsoft Security Response Team. A fix was subsequently applied to the bug that he’d discovered and a few months later the council was awarded a $7500 bounty from Microsoft in recognition of Colin’s work!

Colin said: “I discovered the Microsoft bug while testing new kiosk functionality. The issue enabled a user of the kiosk to work around security restrictions that should have been enforced and instead take full control of the browser settings. I reported this to the Microsoft security team who in turn patched the issue within their Edge application.”

As the pandemic continues, a further 2212 Chromebooks have been distributed/are being distributed to support digital learning in and out with the classroom - which is  a scheme running in phases initiated by the Scottish Government over the past year.

During his downtime Colin enjoys touring the East Lothian countryside on his eBike and taking aerial shots of the scenery by drone.

The impact of the pandemic on the manufacture of computer chips and on shipping capacity continues to pose challenges with the supply of IT equipment. Through long-term forecasting of equipment requirements and some flexible thinking Colin and his team look forward to the challenges ahead in 2022. 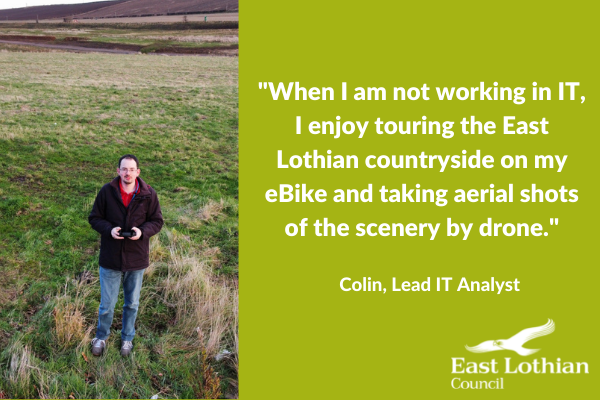