East Lothian Provost, John McMillan, has led the tributes in East Lothian following the announcement of the death of HM Queen Elizabeth II.

“Today is a very significant day in the history of our nation and within our sorrow at The Queen’s passing we must also acknowledge the considerable contribution and example of public duty she made during her long reign.

“For the majority of people she was the only monarch they have ever known and her passing also brings to a close the modern Elizabethan era. Over the 70+ years of her reign she had been witness to many significant world events from the sadness of wars and conflicts to the joy of technological progress including the introduction of the Internet and major medical advancements that have eradicated previously endemic diseases such as polio.

“She was the most widely travelled monarch of all time visiting countries in all five continents but of course also retained a particular fondness for Scotland. She visited East Lothian on a number of occasions – the most recent visit was in 2016 to mark the 200th anniversary of Musselburgh Racecourse.

“During 2022, the year of her Platinum Jubilee, local communities across East Lothian including schools, businesses, community groups and individuals embraced the challenge of the Queen’s Green Canopy and planted trees in a variety of sites across the county that will serve as enduring tributes to her reign.

“East Lothian joins the rest of the nation, Commonwealth and wider world in a period of mourning that acknowledges the passing of an incredible individual whose commitment and longevity to public duty is unlikely to ever be equalled.”

East Lothian’s Lord-Lieutenant, Roderick Urquhart, today said: "I am deeply saddened by the death of Her Majesty The Queen. I send my most sincere condolences to all of the Royal Family on behalf of the East Lothian Lieutenancy and the people of East Lothian.

“For more than 70 years, HM The Queen led a life of incomparable public service and duty dedicated to the nation. She was not just the Head of State of the UK and Head of the Commonwealth, but was also a figurehead of selfless devotion, dedication and service. She leaves a legacy which is unlikely to be matched for many generations.

“Her visits to East Lothian were many and varied over the years, and in particular I have happy memories of her visiting the Lamp of Lothian in Haddington in 2007, and joining the bicentenary celebrations of Musselburgh Racecourse in 2016.

“As Lord-Lieutenant I have been fortunate to carry out many duties on behalf of The Queen, including the presentation of Honours to local residents,  and celebrating 100th birthdays and Diamond Wedding anniversaries, as well as presenting Queen's Awards. On each of these occasions I have been aware of the huge respect and fondness for our monarch.

The recent Platinum Jubilee celebrations highlighted the desire of people of all ages to mark the occasion. In East Lothian, the Queen’s Green Canopy Platinum Jubilee initiative has resulted in many trees being planted across the county, by school and community groups, local businesses and individual residents, all of which together will leave a lasting legacy for future generations.

“Whilst in this period of mourning, we must also recognise the succession within the monarchy, and the inheritance of the Crown by her heir, Charles. As King, Charles will inevitably be a different monarch, but one who will help evolve a new modern relevance to the monarchy, as well as being a true and confident successor to HM The Queen, in continuing the twin roles of head of state and head of the nation and Commonwealth, in the 21st Century.” 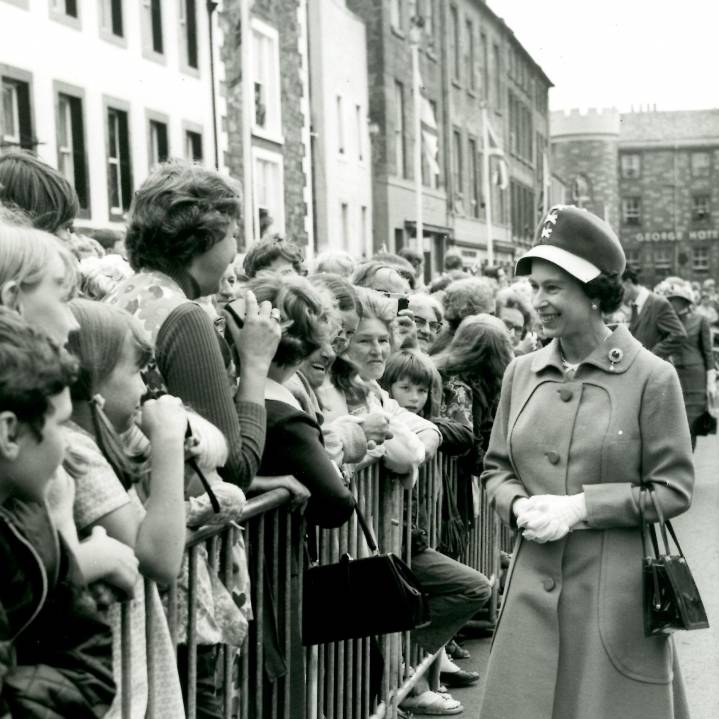 Messages of condolence and the mourning period

Send your message of condolence

Send your message of condolence to the Royal Family

There will be an East Lothian Service of Thanksgiving for the life of Her Majesty The Queen, on Friday 30 September 2022, at 6pm, within St Mary’s Parish Church in Haddington.

The service will provide an opportunity for those who live and work in East Lothian to come together and to give thanks for the extraordinary life and service to the nation of The Queen.

Members of the public are welcome to attend.

There is limited parking around St Mary’s Church.

The Proclamation was read by Provost John McMillan with Lord-Lieutenant Roderick Urquhart in attendance.