The release of Mary, Queen of Scots – a historical drama based on the life of Scotland’s best-known monarch and starring Margot Robbie and Saoirse Ronan – is causing a stir worldwide as it’s released this week.

East Lothian’s stunning Seacliff Beach, near North Berwick, features in the movie and it’s appropriate that East Lothian is featured given the area’s strong connection to Mary.

She visited East Lothian, including Hailes Castle near Haddington, with her third husband, the Earl of Bothwell – the ruins of which can still be visited today. And she’s believed to have played golf at the Old Links at Musselburgh. Hickory clubs can still be hired at Musselburgh to play nine holes as they used to be played.

You can also view artefacts relating to Mary, including an incredibly detailed death mask, at Lennoxlove House, just outside Haddington. Tours are available from Easter to October or by arrangement.

And for a real treat, be quick and visit the John Gray Centre in Haddington until Friday 25th January where you can see an exhibition of rarely seen Mary Queen of Scots and East Lothian-related material.

These fantastic artefacts include a letter to the town of Haddington signed by both Mary and Darnley in 1566. Also included is a charter to the town of Haddington with a perfect example of Mary’s Great Seal attached, also from 1566. Also on display is a copy of the map of the Battle of Pinkie. This map is thought to be one of the first maps of Britain and drawn by John Ramsay, Britain’s first war artist.

There is also an inventory of Mary’s jewels. Written while she was pregnant with James, this list was drawn up by Mary’s Lady of the Chamber, Margaret Carwood. Beside every item Mary indicated who it was to go to in the event of her death during childbirth. Many of the jewels are gifted to her husband, Lord Darnley. Interestingly, though, this document would have been written only weeks after Rizzio’s brutal murder and Mary gifts items to his brother Josef.

These items give a fascinating insight into the tumultuous life of the Queen and her many connections to East Lothian.

Councillor John McMillan, East Lothian Council’s spokesperson for Economic Development and Tourism said: “The story of Mary Queen of Scots is one filled with romance, drama and tragedy, which is why she remains an iconic figure to this day and has been widely studied and written about. I’m really pleased that East Lothian is featured in this latest drama about her life as it gives us a chance to highlight her connections to East Lothian and to put on an exhibition of the artefacts relating to her that we hold that are only on view for a short period due to how delicate the items are. Don’t miss this rare chance to see them! I would hope visitors interested in Mary’s life will take the chance to explore our other sites with strong links to the monarch and take in Seacliff Beach and all the other wonderful landscapes and attractions East Lothian has to offer.”

Rosie Ellison, Head of Film Edinburgh, the film office for Edinburgh, East Lothian and Scottish Borders, said: “The film was many years in the planning and looked at locations all over Scotland before finally settling on Seacliff Beach due to its remarkable topography and beauty. Its prominent position in the final film will undoubtedly help attract visitors with a renewed interest in Mary Queen of Scots to East Lothian.”

For information on East Lothian locations which have been used in major films and TV series, including Mary, Queen of Scots, see the Visit East Lothian website. 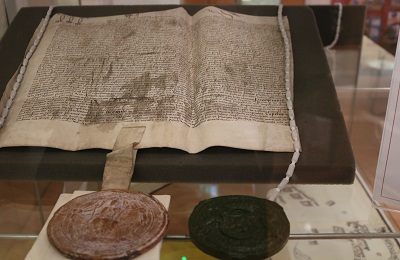