East Lothian Youth Council met on 31 January to share their views on the best ways to tackle climate change in East Lothian, following the approval of the council’s Climate Change Strategy. 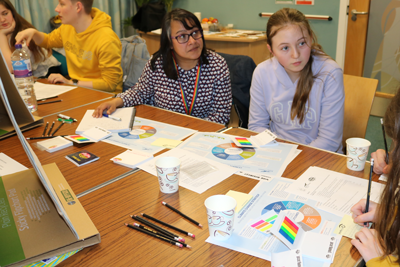 The youth council representatives discussed their priorities and ideas for action on the topics of active and sustainable travel, recycling and waste reduction, energy, and biodiversity and greenspaces. Analysis of the results of the young people's climate change survey showed that these topics are important to young people thinking about tackling climate change in East Lothian. The meeting was also a chance for the young people to share what's being done in their schools and learn from other groups.

The focus on climate change followed on from the last youth council meeting in October where young people were asked to think about what a climate-ready East Lothian might look like, and what challenges and opportunities this brings. The suggestions ranged from promoting public transport and encouraging active travel to removing plastic bags from shops and investigating alternative sources of energy such as hydropower, showing how informed and engaged young people are on the topic of climate change.

Scottish Youth Parliament (SYP) representatives also encouraged the group to get involved in the SYP's latest environmental protection campaign, Pack it up, Pack it in, which looks to empower young people to take action against pollution by reducing waste and improving recycling.

If you're interested in being part of East Lothian Youth Council, get in touch with Caroline Davis, Dialogue Youth Coordinator: