The Armed Forces Day flag is being flown at two of East Lothian’s most prominent civic buildings in tribute to service personnel past and present during Armed Forces Week 2021.

Service life is not easy but those who undertake it do so with a huge pride, selflessness and commitment to others.

East Lothian Council’s Armed Forces Champion Councillor Jim Goodfellow, Provost Councillor John McMillan and Depute Council Leader Councillor Norman Hampshire were joined by Lord Lieutenant Roderick Urquhart and Tom Logan, a member of the East of Scotland branch of the Royal Scots Regimental Association, outside Haddington Town House today (Monday 21 June) to watch as the flag was raised into position. It will remain in place at the Town House and Musselburgh’s Brunton Hall for the duration of Armed Forces Week.

The Council is a signatory of the East Lothian Armed Forces Covenant and, in 2019, was awarded the Ministry of Defence’s Employer Recognition Scheme (ERS) Silver Award. The award is the second-highest badge of honour available to organisations that employ and support Reservists, service leavers, Veterans and their families.

Together with its partners, the local authority works to support the Armed Forces community through its policies and practices. This recognises the unique challenges that Armed Forces Personnel face as they transition to civilian life. Examples include the development of Veterans’ housing at Cockenzie, the creation of a website bringing together information on services available for veterans, and the publication of a guide for Service Leavers moving to East Lothian.

Councillor Goodfellow said: “Armed Forces Week offers us an opportunity in the year to pause and reflect on the debt we owe to our Service Personnel past and present, and also to their families. Service life is not easy but those who undertake it do so with a huge pride, selflessness and commitment to others.

“Over the past year in particular we have seen the role that our Armed Forces play in civic life with the substantial resources and organisational skills they brought to bear in supporting the Covid-19 response, including here in East Lothian with the establishment of testing centres.

“As with many other occasions, the normal way that we would mark Armed Forces Week is not currently possible however I am pleased that we have been able to gather today in a small number to mark the flag’s raising and reaffirm our joint commitment to supporting our Armed Forces community.”

Councillors McMillan and Goodfellow will be undertaking a number of engagements during Armed Forces Week to pay their respects, on behalf of the people of East Lothian, to those who have served and those lost to conflict. This also recognises the enormous positive contribution that retired service personnel make in East Lothian within many voluntary organisations and through activities such as the British Legion and Veteran’s Breakfast Club, which have recently restarted.

Councillor McMillan added: “I recently travelled round East Lothian’s Commonwealth War Graves to pay my respects to those lost to conflict. In doing so I was fully aware that these people travelled overseas on our behalf, paying the ultimate sacrifice, but also that there are many people within our communities who have served more recently and bear other scars from service, many of which are unseen.

“As a signatory to the Armed Forces Covenant East Lothian Council is committed to supporting Forces leavers who choose to settle in East Lothian bringing with them the skills and knowledge they have acquired during their service. We will continue to work with our partners from Service organisations, health and voluntary partners to provide the support they need. It is the least our society can do.” 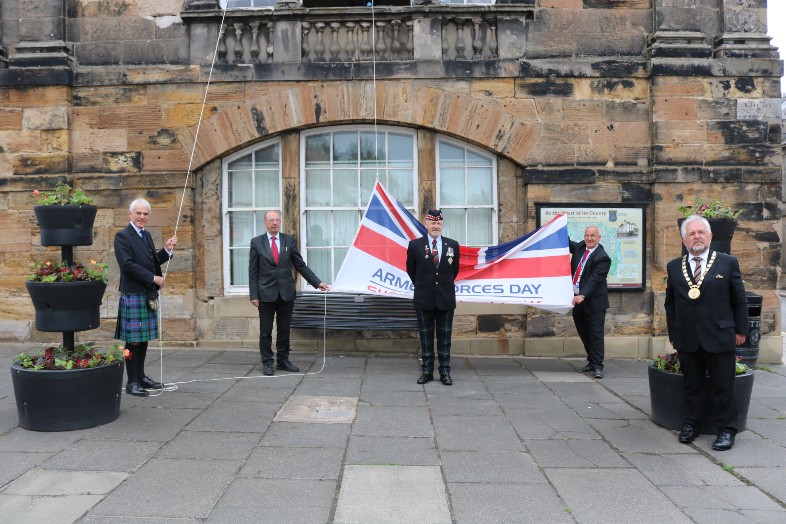 The flag will be raised to mark Armed Forces Week 2021.